Complete the form below to receive the latest headlines and analysts' recommendations for KEMET with our free daily email newsletter:

Public Sector Pension Investment Board lessened its stake in shares of KEMET Co. (NYSE:KEM) by 35.5% in the fourth quarter, according to its most recent Form 13F filing with the SEC. The fund owned 130,164 shares of the electronics maker’s stock after selling 71,500 shares during the period. Public Sector Pension Investment Board owned about 0.22% of KEMET worth $3,521,000 as of its most recent SEC filing.

KEMET (NYSE:KEM) last posted its quarterly earnings results on Thursday, February 6th. The electronics maker reported $0.46 EPS for the quarter, topping the consensus estimate of $0.36 by $0.10. The firm had revenue of $294.70 million for the quarter, compared to the consensus estimate of $292.43 million. KEMET had a net margin of 10.21% and a return on equity of 25.26%. The business’s revenue was down 15.8% compared to the same quarter last year. During the same period last year, the firm posted $1.06 earnings per share. As a group, equities research analysts predict that KEMET Co. will post 2.1 EPS for the current fiscal year.

In other KEMET news, Director Robert G. Paul sold 6,000 shares of KEMET stock in a transaction that occurred on Monday, February 24th. The shares were sold at an average price of $26.06, for a total transaction of $156,360.00. Following the transaction, the director now directly owns 84,201 shares of the company’s stock, valued at $2,194,278.06. The transaction was disclosed in a legal filing with the Securities & Exchange Commission, which is available at this hyperlink. Company insiders own 1.76% of the company’s stock.

Featured Article: What is the price-to-earnings growth (PEG) ratio? 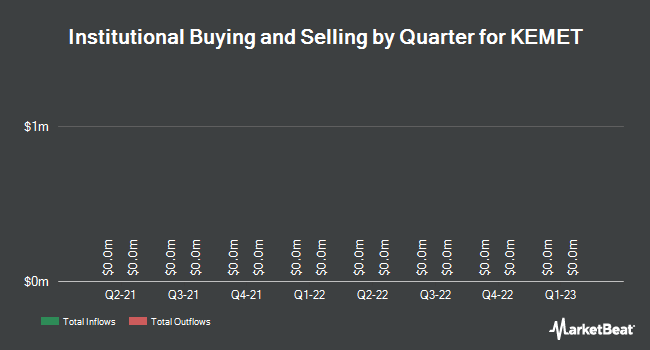 Receive News & Ratings for KEMET Daily - Enter your email address below to receive a concise daily summary of the latest news and analysts' ratings for KEMET and related companies with MarketBeat.com's FREE daily email newsletter.